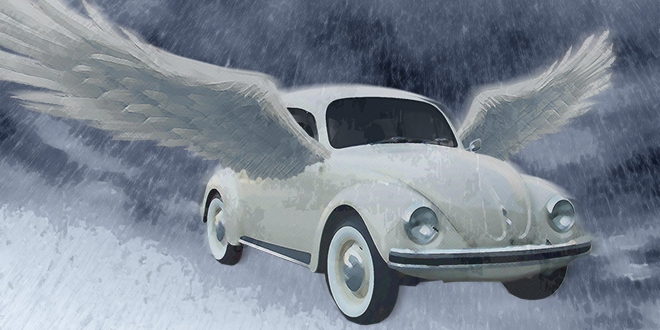 It had been a long journey, and now Emily found herself at the Taberg look-out view. The city lay sprawled by the bank of a great lake in the distance below the foot of the mountain. From where she was standing, the path took a sharp turn downward. No road had been built to safely zig-zag down the slope, instead, the city plan had been lost in a tangled path through miles of red tape. What remained was an old dirt road from a pre-dynamite era where villagers had taken the easy but very steep road straight down.

She took a deep breath and hopped back into her Volkswagen Beetle and glanced at the warning signs one last time. Sure, her car could crawl, but the road was still muddy from the rain. She would have to drive really slow with her foot on the brakes. At least there was a fence at the bottom of the slope, in case she would miss the turn before the next drop. She started downward. All was well. She was in control. The greatest challenge was to keep the car at a speed of 5 mph., especially since the tire ruts from previous traffic grew along the path.

Now she regretted taking the detour into the small city. Her mom had talked her into going on this blind date. Yes, her mother. The poor guy was probably as apprehensive as she was, humoring his own mom. They were to meet by the town square fountain. As cheesy as it sounds, he would recognize her by her red scarf, and she would identify him by the red rose he would hold. This too had been arranged by their mothers. She could still hear her mother’s persuasive voice in her head: “He’s a lovely boy and he owns his own towing business. He’s very responsible”.

The thick muddy tracks became increasingly dispersed, and she had to speed up to jump them, then hit the brakes. Emily became increasingly concerned as the car became more difficult to control. She was almost at the end of the first slope now, where the fence clung to whatever shrubbery it was surrounded by. It was impossible to turn around and go back uphill. Her Beetle had come to a stop, and she gathered up the courage to hit the gas pedal along with a daring maneuver to turn her car and follow what was normally an easy left turn. The turn, however, slid a few extra joyful degrees and the Beetle’s heavy behind dragged her a few inches backward for every inch Emily tried to make the wheels spin forward. The car was now sliding towards the fence, like a pea in a strainer.

The rain had started again and it added to the already wet terrain. The mud was no longer just mud, but an abstract geological animation. The Beetle hit the fence, but it wasn’t the first to do so. There were a few long ago abandoned cars stuck in the mud pushing against the fence. Emily rolled down her window and observed the loosened soil uproot the greenery beneath in a stream of continuous rainwater. Panic hit too late. The fence broke loose, and all Emily could do was cling to her steering wheel, close her eyes and hold her breath. The car, it’s breakout companions, and all the shrubbery went over the cliff and splashed down to a small plateau below.

Emily exhaled along with the splash landing. That wasn’t so bad compared to the doom she had imagined. They seemed safe, only, everything kept on moving.

When Emily looked out the window again, she didn’t see mud, but a flood of merging rainwater. The Beetle continued on the path as if on a log flume. Where was that next exhilarating drop? The path intensified and the door refused to open against the pressing force of the stream.

She was closing in on the town now, just below and situated next to the formation of the rock wall at the foot of the mountain. The small car ping-ponged between rocks and splashed down a waterfall onto the last plateau behind the rest of the cars. A dam had formed and natural barriers stopped them from going further. When the Beetle arrived at the scene, it was out crowded. It hit the racked cars like a billiard ball and made a 45 degree turn towards the one pocket free of barriers. The small beetle took flight.

Emily curled up in her seat and prepared for the crash. The nose of the beetle hit hard and shook her violently inside the tight cabin. There was a strange buoyancy to the collision, however. Emily opened her eyes, surprised that she was still alive. Her whole body was throbbing with pain and her vision blurred from the vibration her brain had endured. She leaned back and closed her eyes again, releasing the tension of her limbs. The car settled and bobbed to the rhythm of the clattering rain. That’s when she heard voices.

Someone knocked on her window and opened her door. “Miss, are you okay?” Feeling disoriented, Emily focused her vision on the elderly man as he patiently waited for her to respond. He was standing in knee-high water, holding an umbrella. Her mind quickened and she surveyed her surroundings. The little bug had landed in the fountain of the town square, and it was surrounded by crowds of curious onlookers. She sat up to make sure her bones were still aligned and her limbs able to move. “Yes, I think so,” she finally answered. The gentleman smiled and reached out a hand to carefully help her out of the car. An ambulance arrived, shortly followed by a news team.

While Emily’s condition was evaluated by the first responder, she wondered how her little car was holding up as it was dragged out of the fountain and lifted onto the street by a tow truck. Once the Beetle was secured, the tow truck driver grabbed her belongings and pushed his way through the crowd. Everything was was wet, and while she checked the contents of her purse, the tow truck driver squeezed the water out of her red scarf. The red scarf – her mother would be so disappointed. “Don’t worry about your car – I’ll take it to the shop,” he told her while giving her a reassuring smile.

Cameras flashed and the news team was held at bay. Emily’s Beetle in flight became big news in the small town, and she was celebrated as a miracle. She had survived Hell’s Steep during the heaviest rain season of the century, and the knot of the red tape that had prevented the city plans for a new road was quickly untangled. The larger mystery about the car crash was presented in the next day’s morning paper, however. The photographer had captured a strange development to the story. On the front page photo, he had caught the moment the tow truck driver mysteriously handed the victim a red rose.